Preserving a Legacy, Providing a Dream

For well over 100 years children have been playing baseball and softball at Ely Park in Lambertville, New Jersey. No doubt it was a wistful dream of many a Little Leaguer to hit a home run to dead center, over the fence located beneath the massive centuries-old London Planetree that stood there. It was a fixture of the park and many were saddened when it was cut down in 2014. The tree, a cross between an American Sycamore and an Oriental Planetree, lives on thanks to a collaborative venture of local mill Niece Lumber and The Friends of Ely Park. It was milled into workable slabs which were offered to thirteen local artisans who volunteered their considerable talent and creativity to craft the works offered in this sale.

All proceeds from the sale of these works will benefit The Jim Hamilton Memorial Shad Fest Scholarship Fund which awards two $10,000 scholarships annually to local students pursuing a degree in the fine and performing arts.

Works from The Giving Tree Project

Reject from the Bat Factory

The Jim Hamilton Memorial Shad Fest Scholarship was created for the purpose of promoting the next generation of artists in the Delaware River Valley. Born from the desire the celebrate the vibrant arts community that exists in Lambertville and New Hope, the scholarship exists solely to award money to local students going to pursue a college degree in the fine, performing arts or culinary arts. After Jim Hamilton’s passing, we wanted to honor Jim by recognizing both his own artistry and his strong commitment to bettering the community in which he lived and worked. The Shad Festival Poster Auction and the Scholarship that it funds serve the dual purpose of promoting local artists through showcasing their work in the auction and funding the next generation of artists through the awarding of scholarships.

How it All Began 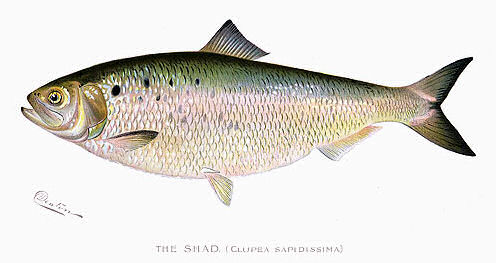 American Shad from the First Annual Report of the Commissioners of Fisheries, Game, and Forests of the State of New York (1896).

Back in 1981, Lambertville was desolate. Store fronts were empty, bats reigned supreme in the rail road station and no one knew quite what to do. The Lambertville Area Chamber of Commerce was headed up by two visionary men, Jack Curtin and Jim Hamilton. Both shared a love of Lambertville and both were talented showmen. Years of manufacturing on the river had killed much marine and wildlife. The factories were now shuttered, and the men noticed that the Shad had returned to their migratory habit of swimming upstream to spawn. Being showmen, they decided to make a Festival celebrating the Shad Run. The Shad Fest would celebrate the environment and the deeply rooted artistic community that has existed in Lambertville and New Hope since the first half of the twentieth century.

At the request of Curtin and Hamilton, Ellen Hall and Harry Haenigson organized the very first art auction. Theater legend St. John Terrell was the very first auctioneer. The auction took place on the back of a hay wagon in the North Union Street parking lot. Haenigsen was the director of the Bucks County Playhouse as well as a nationally syndicated cartoonist. Terrell was the founder of the Bucks county Playhouse as well as the legendary Lambertville Music Circus a decade later. In addition, Terrell began the traditional re-enactment of Washington crossing the Delaware on Christmas day, playing the roll of Washington himself and he was a founder of the NJ Council on the Arts.

St. John Terrell was one of several notable auctioneers that have held the gavel for the poster auction. Pat Kendig and Merle Citron picked up the gavel in 1982 and continued the tradition for twenty years. Merle is a well-known local artist who sold her paintings of vegetables from a vegetable push-cart she created and decorated just for the Festival. For a time, PBS stars David Rago and Suzanne Perrault of Antiques Road Show were our auctioneers and now the gavel is ably wielded by New Hope Mayor and art and antiques expert Larry Keller.

The Shad Fest Scholarship has awarded over half a million dollars to local students going on to pursue a degree in the fine and performing arts. These students have done amazing things from cinematography to fashion design to making their living as a fine artist right here in the Delaware River Valley. This has been done by a unique and amazing partnership between artists and business people. The Chamber, whose board members include Eliane Talec, Rago CAO and Sam Grillo, Rago cataloguer, organizes and runs the auction, but the funding all comes from sale of original works of art generously donated by local artists. These artists are both professional and amateur. Many of the professional artists are regionally, nationally and internationally recognized.